Securing a duvet cover to a comforter 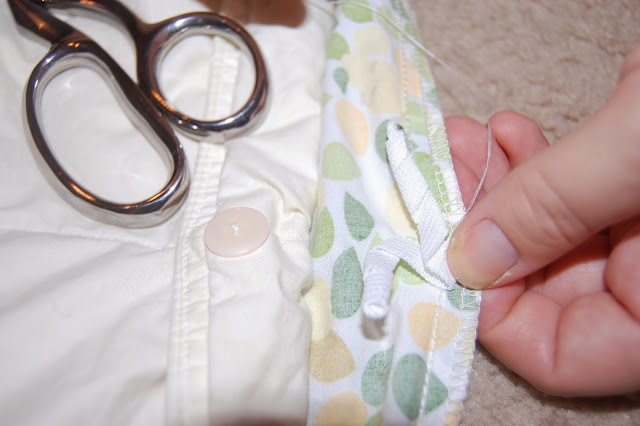 So, I have had issues with our guest bed duvet cover and duvet ever since I bought it about three years ago!!  It was always getting twisted, or the comforter would get all bunched on one side inside the cover, it was really annoying always having to fix it.  Another problem was my duvet cover and duvet were different sizes!!  I think both the duvet and the cover were irregular or something, but it was super annoying.

So, I finally did something about it.

I made the duvet cover a little bit smaller to fit the comforter by sewing it up one side.  I'm guessing other people already figured this out, but I'm just now getting around to it.

I sewed seven buttons onto my comforter. (Technically, John sewed on a few...)  One in each corner, two in the middle on the sides, and one on the top in the middle.  I then cut off some of the strings already attached to the cover and sewed them on to all the places that would match up to the buttons on the comforter.

I tied the strings around the buttons, and hopefully won't have to worry about fixing it ever again!!  Yay for getting one of my projects done!!!

Email ThisBlogThis!Share to TwitterShare to FacebookShare to Pinterest
Labels: Creating