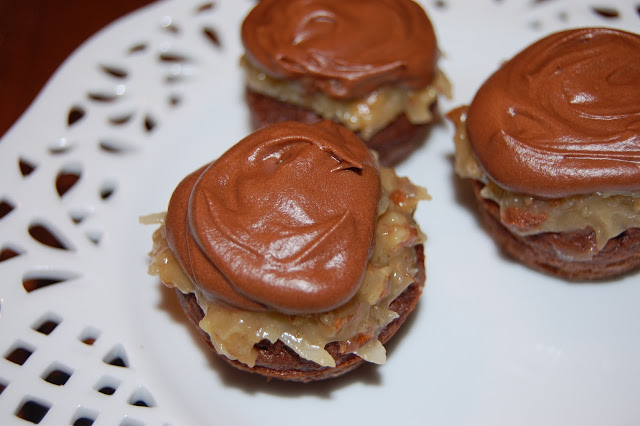 The only thing is my Grandma's (and most others that I have had) German Chocolate cakes are usually more dense with a little different taste than these cupcakes.  These cupcakes are delicious, but you can still tell that they are made with a box mix even though you add other stuff to the box mix.  Also, the cupcake is so light and fluffy, that it is almost too light and fluffy to hold the layers of frosting.  I made both mini cupcakes and regular sized, and the regular sized were able to hold up to the frostings a lot better.

I changed how she mixed the ingredients together as well, because I am way too lazy to do the sifting and alternating (unless I am making an angel food cake!).  My cupcakes turned out so fluffy, if they were any fluffier I would have been chewing on air...

Also, I didn't have evaporated milk for this recipe and after some searching the internet I just made my own!

I will definitely be making these again!

3. Add cake mix and buttermilk and mix until combined.

4. Add Buttermilk and stir until combined.


5. Add sour cream and mix.
6. Fill cupcake liners ¾ full and bake for 18-22 minutes or until an inserted knife comes out clean.
7. German Chocolate Frosting: On medium heat in a sauce pan, constantly stir evaporated milk, sugar, egg yolks and butter until thickened. (Basically, until it boils and it will take approximately 15 minutes.) Stir in vanilla extract, pecans and coconut. Let cool.
8. Chocolate Buttercream: Beat cream cheese and butter for 4 minutes. Add cocoa, powdered sugar and vanilla extract. Let beat for 3 minutes. If it is too thick, add milk. If it is too thin, add powdered sugar. Or if it is not dark enough, add more cocoa. This recipe for the buttercream you'll definitely have to play with a little bit.
9. Pipe or spread the German Chocolate Frosting on top of cupcake then spread the buttercream on top of that.  You can see the fancy way she did her frostings HERE.  I didn't feel like piping anything.
10.  Enjoy!! They are so yummy! 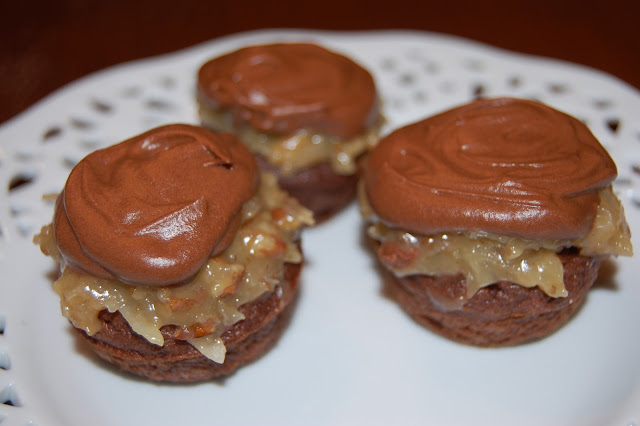