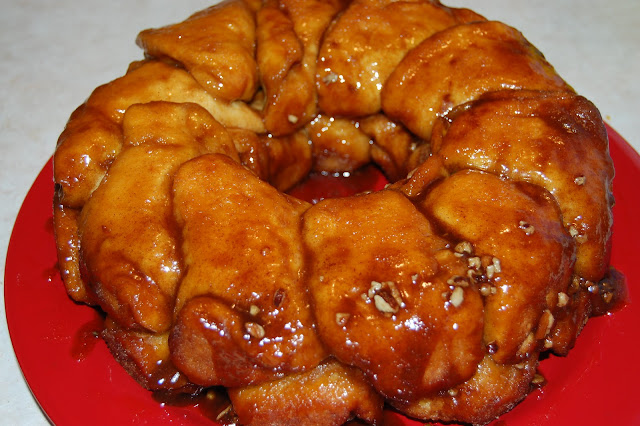 This was yummy!  The only thing is, the cream cheese filling in each biscuit is a bit much.  None of my kids liked it, and I didn't either.  If you want to try the cream cheese with it, trust me and at least half it.  I also used pecans instead of walnuts, and only put them over half of the bread.  I will definitely make this again, just without the cream cheese - I guess, that would make it plain monkey bread, not gorilla bread.  :)  Recipe from HERE.

2.  In a small bowl, mix the granulated sugar and cinnamon.

3.  In a saucepan, melt the butter and brown sugar over low heat, stirring well; set aside.

5.   Press the biscuits out with your fingers and dip both sides in the cinnamon and sugar mixture, covering throughouly.  (my 4 year old did a great job!) Place a cube of cream cheese in the center of each biscuit, wrapping and sealing the dough around the cream cheese.

6.  Sprinkle 1/2 cup of the nuts into the bottom of the bundt pan. Place half of the prepared biscuits in the pan.

7.  Sprinkle with cinnamon sugar, pour half of the melted butter mixture over the biscuits, and sprinkle on 1/2 cup of nuts.

10. Remove from the oven and cool for 5 minutes. Place a plate on top and invert.