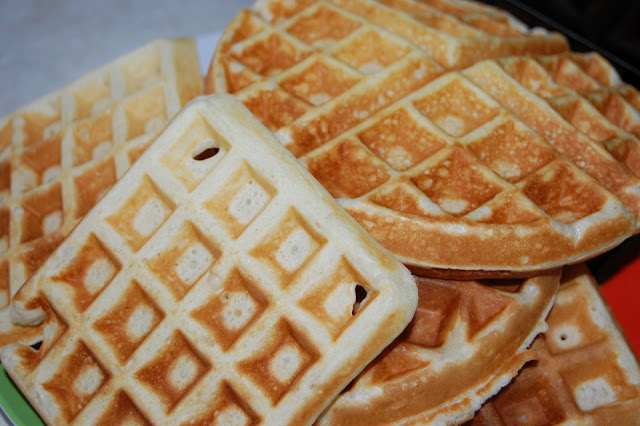 When John and I were married we were gifted two different waffle irons - we kept both!  It's such a pain to make waffles and have people have to wait to be served a waffle because you only have one going!  So, if you know of someone getting married, tell them to keep the waffle irons!!

Anyway, I like waffles, but I love Belgian waffles.  This recipe isn't a Belgian waffle, but they are firm like Belgian waffles, so I love them.  (most Belgian waffle recipes I have found use yeast, that's the big difference)  I do not like soft, floppy waffles!  I think if you're going to make floppy waffles, you might as well be making pancakes.
The secret to firm waffles - the milk!  Who would have thunk it?  If you sub the milk with buttermilk (because buttermilk USUALLY makes everything better) you will get a floppy waffle.  So, moral of the story, don't use buttermilk in your waffles if you want them firm.
I love my waffles with our homemade strawberry compote and whipped cream!
Waffle Recipe
makes 10 waffles
8 t. baking powder
4 c. flour
1 t. salt
2 T. sugar
3 c. milk
1 stick (8 T.) melted butter
4 eggs, separated
Mix dry ingredients and sift into a bowl (though we rarely sift it...).
Separate the eggs, and beat egg whites until stiff.
In a separate bowl, beat egg yolks; add butter and mix.   Then add milk and mix.
Gradually add egg, butter, milk to dry ingredients, beating thoroughly.
When well mixed, fold in egg whites.
Pour on hot, well-greased waffle iron.
Enjoy!
If you think you have the best waffle recipe - send it to me!!!!!  You know I love trying new recipes....