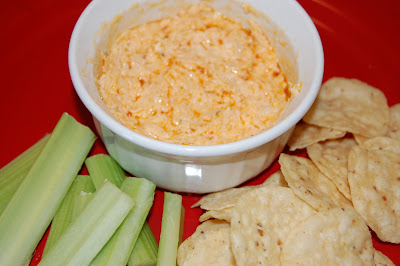 I like that my husband can cook. I guess, I don't know any woman that wouldn't like that their husband could cook.
For our Super Bowl gathering, which is really more of a feasting and game playing gathering rather than a watching the Super Bowl gathering... We sure did some feasting, and this morning I'm still not hungry. (Though, I may have indulged in some of this dip for breakfast...)
John usually gets to pick the menu for this party, and he found a recipe online that he wanted to try this year. Except when he made it, he totally made it his own, not even following the recipe. Awww... we're a match made in heaven.
You can see the original recipe HERE.

Put all ingredients into an electric fondue pot, and heat on low until melted. (John's one tip would be to cream the cream cheese with a mixer to make the melting go faster.) Serve with nacho chips and celery.
It's that easy! AND yummy!
This recipe could be baked as well. See original recipe for those details.