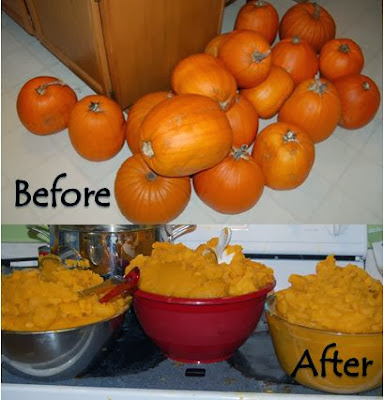 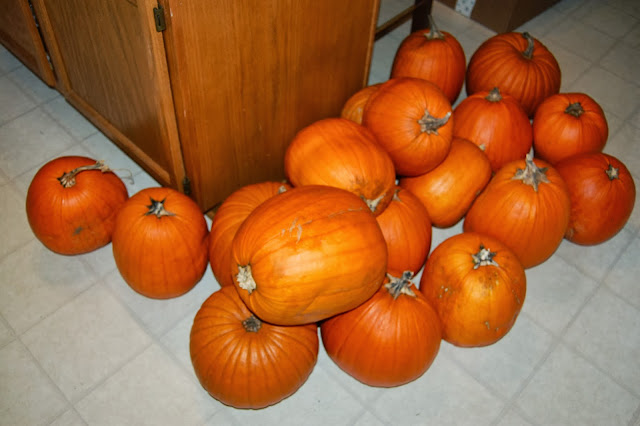 You guys know I'm crazy.  Well, this might be crazier than the time I went shopping the day after I came home from the hospital when Jonah was born...  This was a 9 hour project!!  By myself, while taking care of my kids!!!!!!!  But, I'm not going to lie, on days like that I wish I had a farm and was Amish (but with electricity and such....)  Oh, the simpler life...

Anyway, the day before Halloween I took my kids to the Pumpkin Patch to pick out their pumpkins to carve.  (Better late than never, right???)  The lady was super nice and I got a steal for three pumpkins (I thought I would have to pay more!).  I was chatting with her about what they do with the pumpkins after Halloween and she said they just throw them away!

My mouth probably hit the ground!  She told me if I came back the next night after six I could just have whatever I wanted.  I probably dreamed about pumpkins that night and could not wait until the next evening. Who cared about candy??!!  I was going to make pumpkin puree!!!

I went on Halloween night to get my pumpkins (of course after I took the obligatory photos of my own trick or treat-ers, put candy on my door step, and agreed to meet up with my husband and kids after getting the pumpkins only five minutes down the road).  There were two men there (surrounded by the aroma of alcohol I might add...)  getting free pumpkins and such for their chickens and hogs.  They were a little to chatty and I loaded up my trunk with pumpkins as fast as I could!  The lady was so nice and I told her if she was there when they sold Christmas trees (same farmer uses same lot) I would bring her some pumpkin goodies in December!

I had originally thought I would can it, but turns out the FDA says not to do that.  In fact, you shouldn't even eat pumpkin butter that was canned.  (Pumpkin puree you can can pumpkin chunks if you pressure cook the crazy out of it!)  Anyway, I was a little bummed when I read about it (and researched it a lot just to be sure!).  Turns out I could have asked my Grandma, because she told me when she was young she canned pumpkin puree and her aunt told her it would go bad, and it did!

So, I got 21 pumpkins and had to throw away two by the time I was able to get to them.  I still have two more to do actually that are just sitting in my kitchen floor...  I just can't bring myself to do them.

You guys... there was pumpkin from one spot of my kitchen to the other - pumpkin was absolutely, insanely  everywhere!!  It was such a ginormous mess!

17 pumpkins made 38 - 2 cup bags full for my freezer!  Can you even believe I almost bought some canned pumpkin at the store today knowing that?  It was only 89 cents a can though!! I did refrain however.

Anyway, I use the puree as baby food for Everett, and I've already made some pumpkin chocolate chip cookies.  However, cooking with this pumpkin puree doesn't give the cookies that darker color that canned pumpkins give your cookies.  But, they were still delicious!!!


Okay, so there are a few ways to make pumpkin puree.  I did most of them.  I cooked some in the oven (Please use a cookie tray under yours....  just a tip...). 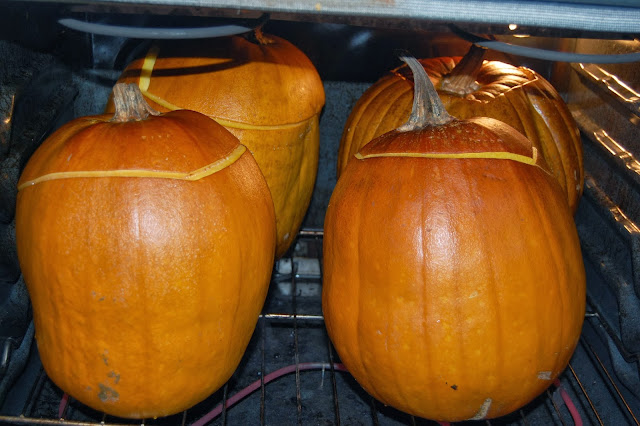 Then peeled off the peeling, then had to cook some a little more on the stove, then puree...  I did both ways since I was doing so much and my pots could only hold so much at a time.  My preferred method is below.


Homemade Pumpkin Puree How To

1.  Cut your pumpkin in half or really however you want to.  Clean out the inside guts and seeds.

2.  Peel the skin off of your pumpkin.  Cut your pumpkin into pieces.  (like how you make mashed potatoes)

3.  Put just a little bit of water in a large stockpot.  Put pumpkin in pot and cover with lid.

4.  Boil and steam until pumpkin is super soft and well cooked.

7.  Line strainers with paper towels, pour in pumpkin puree, and allow to drain.  Repeat to get more liquid out.  I use fresh paper towels each time.

8.  Allow to cool, then put in bags or containers to freeze!


I actually overworked my small chest freezer by putting too much in at a time... Now I know for next time!!

Yay!! I can make pumpkin whatever without having to run to the store!!!!