My attempt at making CRONUTS! 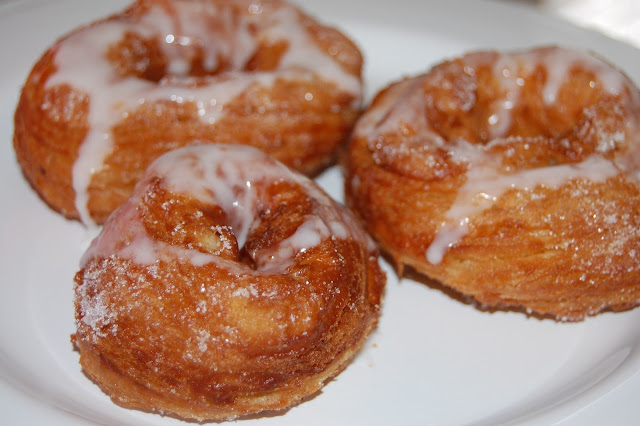 Surely, you have heard of cronuts by now...   However, I won't be making it to NYC to try one anytime soon, so of course I had to try to make my own.  Cronuts are a cross between a doughnut and a croissant.

I read quite a bit about them and researched some different recipes.  I found this one from G Bakes! that I decided to try, and if you are going to try to make them yourself, go to her blog and follow her recipe and directions! I just like to have the recipes I try here on my blog, but she puts great directions and photos on hers, that you really can't make them without seeing those.  I love that her recipe came from her mother's recipe box.  It was an old recipe, and obviously cronuts have been around for a while, just that they weren't called cronuts.

Mine tasted great, they had layers, but they weren't as tall as normal cronuts look....  I have a couple of things I'll do different next time...

1.  My dough needed to be a bit firmer.
2.  I crushed the layers after they rose by not using an actual doughnut cutter.  My cutter wasn't tall enough, so with each cut I was cramming the layers together I think.
2.  I needed to wait until the cronuts were completely cool to add the glaze.  The glaze could be a bit thicker too.
3.  I could not get my oil to the right temperature!!! It was a little bit insane!

for the butter block

1.  In the bowl of a stand mixer, whisk together the water, milk, eggs and vanilla bean paste until smooth, making sure that the egg yolks are completely incorporated into the mixture.

2.  In another bowl, stir together the flour, sugar, instant yeast and salt.  Add to the wet ingredients in the mixing bowl and attach the dough hook.

3.  On slow speed, mix the dough for 5 minutes until smooth.  Add the butter, a few bits at a time.  Continue mixing until the dough pulls away from the sides of the bowl and is smooth and shiny, about 5 more minutes.  Turn the dough out onto plastic wrap and cover completely.  Refrigerate for 20 minutes.  In the meantime, make the butter block.

4.  Fold a piece of parchment, the size of a half sheet pan, in half.  Set aside.

5.  Cut the butter into small pieces. Combine the butter and flour in the bowl of a stand mixer fit with a paddle attachment.  Mix on slow until the butter is smooth.

7.  Remove the dough from the fridge and turn out onto a lightly floured surface.  Roll into a 9" x 18" rectangle.  Place one piece of 6" x 8" dough across the center of the dough and lift the left piece of dough up and over the butter, sealing the edges with your fingers.  Place the other sheet of butter on top and bring the other half of dough over that, again sealing the butter in.  Wrap in plastic wrap and chill for 20 minutes.

8.  Turn the dough out onto a lightly floured surface.  Roll the dough into an 8" x 18" strip.  Fold both narrow ends in to meet at the center,

10.  Whisk yolks, sugar, salt, cornstarch and vanilla bean paste  in the bowl of an electric mixer until light and fluffy.

11.  Simmer cream and milk in a heavy saucepan and slowly pour the hot cream into whisking sugar/yolk mixture until well combined.

12.  Transfer back to the saucepan and whisk over medium heat until thickened.

13.  Place in a bowl and cover the top of the cream with plastic wrap to prevent a skin from forming.  Refrigerate until completely cool.  You can add many flavors at this point, including orange blossom or rose oil.

14.  Roll out the chilled danish dough to 1/4 inch thick on a floured surface. Allow to rest for 10 minutes . Stamp out "donut" shapes with a very sharp donut cutter.  Transfer the donuts and "holes" to a parchment lined sheet pan.  Cover with plastic wrap and allow to proof for an hour, until doubled in size.  Be careful to proof in an area no warmer than 70-80ºF.  It may take longer than an hour.

15.  In a large stock pot, heat the oil to 350º to 360º F.  Carefully place the donuts (and the holes) in the oil.  Allow the donuts to fry on one side for 45 - 60 seconds, until deeply golden brown.  Using chopsticks, flip the donuts and fry for a minute more, until both sides are deeply golden brown and they donuts have expanded considerably.  The holes take less than half that time.  Place the donuts on a piece of paper towel to drain and cool.


16.  Once the donuts are cool, coat the outside of the donuts (and holes) with the granulated sugar.  Place the cooled pastry cream in a pastry bag fit with a small open tip.  I find open spaces in the center of the donut holes and wiggle the tip inside and squeeze in the cream.

17.  For the glaze, place the confectioner's sugar in a bowl and stir in 1 tablespoon of milk.  If the glaze is too thick, add a drop of milk at a time until the glaze is spreadable.  Drizzle on top of the donuts.