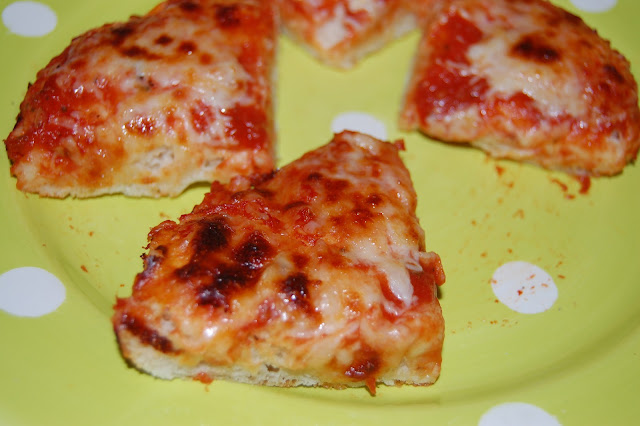 I make homemade pizza quite regularly at my house, despite Trevan not liking homemade pizza.  He actually likes this kind and I have no idea why he likes this recipe and not others (thicker dough?), but whatever.

The original recipe of this has a sauce to it too, but I didn't try that part of the recipe, I just tried the dough.  I have made it a handful of times, and it has always turned out great.  Except this time shown in pictures where I forgot it was in the oven and burned it...  :)

This dough is pretty similar to Pizza Hut's, but I wouldn't say it is exact.  Of course it wasn't as greasy as theirs either, but I don't use the full amount of oil.  But, it''s definitely tasty!  Original recipe from HERE. 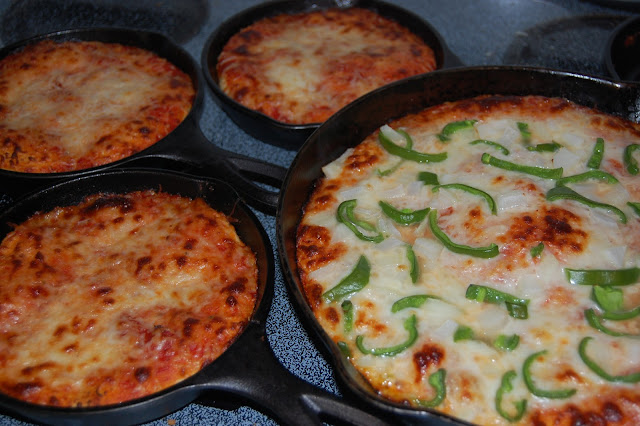 2.  Turn out on to a flat surface and knead for about 10 minutes. Divide dough into three balls. In three 9" cake pans, put 3 Oz. of oil in each making sure it is spread evenly. Using a rolling pin, roll out each dough ball to about a 9" circle. Place in cake pans.  (I just let my kitchen aid knead it, and I used my cast iron skillets)

3.  Spray the outer edge of dough with cooking spray. Cover with a plate. Place in warm area and allow to rise for 1 to 1 1/2 hours.

4.  For Each Nine Inch Pizza: Preheat oven to 475 degrees F Spoon 1/3 cup sauce on dough and spread to within 1" of edge. Distribute 1 1/2 Oz. shredded mozzarella cheese on sauce. Place toppings of your choice in this order: Pepperoni or Ham Vegetables Meats (cooked ground sausage or beef) Top with 3 Oz. mozzarella cheese Cook until cheese is bubbling and outer crust is brown (about 15 minutes, but check on it, because 475 degree is hot, and you don't want to burn your pizza, like I did that one time....)