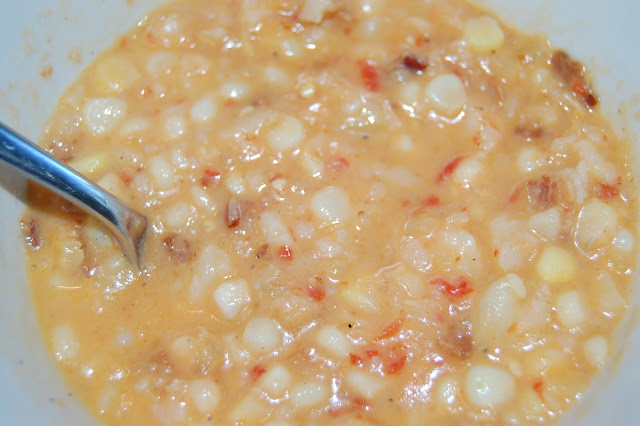 I'll admit I was a bit skeptical about trying this recipe, but I loved it.  I got it from Pinterest, and it was originally a Weight Watcher recipe.  I changed it a bit.. It only called for one potato, but there are five people in my family, so I used three.  The recipe calls for skim milk, and John was like, "you should use cream!"  :)  I used 1 c. of skim milk, and 1 c. of 2%.

It was really yummy, very flavorful, and quick to throw together!

1. Pierce potatoes several times and cook in microwave - about 8 minutes. Allow to cool.
2. In a large pot add olive oil, saute celery, onion, red pepper.
3. Add milk and bacon.
4. Peel potato, then add to pot and use a potato masher to mash in pot.
5. Add salt, pepper, and corn.
6. Cover and simmer for 10 minutes - do not boil.

** I have to try and make all my meals as kid friendly as possible - so we put the celery, onion, and red pepper in a food processor and pulverize it so there are no chunks of them so there will be a bigger chance of my kids eating it...  But, I actually never fed it to them - Between John having it in his lunch, and me eating it all, the kids got fish sticks.  :)