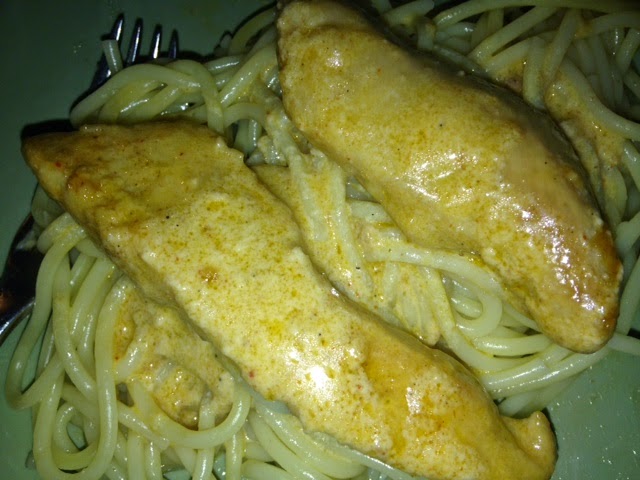 I've been in a depressed kind of funk lately, and then I realized that I haven't been cooking and trying new recipes, which makes me happy - so I turned to my Pinterest boards and made a plan!

I've tried quite a few new recipes and I thought I'd share the good ones with you!  I tried this Chicken Marsala, and while edible, I won't make it again.  I don't have Marsala wine on hand to cook with, and I often sub vegetable broth with no problems, but this recipe was way too bland with just the broth.

One of the good recipes was this Chicken Lazone! I have no idea what the word Lazone means or even how to pronounce it, so I'm just going to call this recipe Lazy Chicken, because it was super easy and you can make it even if you're feeling lazy like I was!

It's flavor is similar to an alfredo sauce, but not as thick as an alfredo sauce.  We also sprinkled parmesan cheese over the top of ours and it was delish!  The recipe calls for cream and if you don't want to be a Fatty McFatterson like me, you can sub some milk or half and half and I'm sure it will be fine.

2.  In large saute pan, melt half of the butter over medium-high heat. Cook the chicken until done, about 8 minutes.

3.  Pour the cream and remaining butter into the skillet.  Lower heat and simmer until the sauce thickens, about 5-7 minutes.  Serve chicken and sauce over pasta or mashed potatoes, if desired, (I used spaghetti noodles.)