I only do "big" birthday parties for my kids every three years.  I only let them have as many people as the age they are turning plus one.  It's a good rule of thumb when planning a child's party.  We celebrate every year, but I will only do the whole big themed party, invite friends to bring presents thing every three years.

His last party was the Carnival party for his fifth birthday, and this year, Trevan turned eight and he wanted an Angry Birds party. So, I thought I would be super organized and put together an Angry Birds Party Board on my Pinterest thinking I would be super prepared before his party even came close... Two weeks ago I handed out the invitations, and the following party was all put together in two days... Bless my heart.

I've been busy, tired, and broke - leaving little motivation.  The only motivation I had was to make sure he had a party.  John helped (strongly encouraged...) me to keep it simple, and I think I did.  Besides, why do kids need fifteen options on their food table?  Do they really need cute cookies, cupcakes, and cake pops for one party?  Uh, no.

Anyway, thank goodness for Pinterest for making my life easier!

I customized the invitation below which was a free download from HERE.  Awesome!

Here was the food.  Don't mind the shadows.  (By now, you know I'm not a photographer so I'm pretty sure you don't come here to see cool pictures...)  I printed the banner from the same link as the invitation. 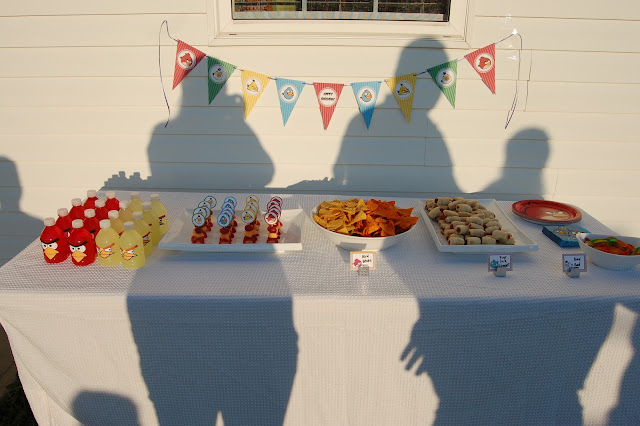 The drinks may have been the only original idea I had.  But, I've looked at so many Angry Bird things on Pinterest, that who knows I could have stolen this idea too!
﻿


Let me tell you about the cake...  (I took the idea from HERE)  I haven't made a cake like this ever - with the frosting making a picture.  Not really a hard thing, just very time consuming.   I was pretty excited when I saw how it turned out, and I couldn't wait to see the look on Trevan's face when he saw it... I pick him up from school, bring him home, show him the cake, and he's like, "That's not really what I pictured..."  Total buzz kill!  He wanted a cake that had more than one bird on it apparently, and I missed that conversation.  I said, "Fine, that's the last birthday cake I make for you!"


So, I was going to do an angry birds training camp, and have them rotate through stations, but I had to run out of time to do something and this was where it was...  So, I only did two of those activities.

One training activity was (I didn't get a picture) I printed up some green pigs (found HERE) and the kids were to pair up.  One child was to hold up the pig in front of their face while the other was supposed to dunk one of those soft, squish balls in water and use a sling shot and try and hit the pig.  The only thing, moments before the party started I couldn't find the splash balls - which had been in my living room all week...  It was so frustrating.  So, I let them do large spitballs (wet paper towels), which didn't really work with the sling shots, but worked okay to throw.

The only other training activity was I printed off these 3D paper angry bird characters (from HERE), and partners stacked up pigs (there were four of them), and then used a sling shot and tried to shoot the birds to knock down the pigs.


Then I divided the kids into teams and they played Angry birds with boxes and pigs, and threw balls to try and knock down the pigs, which I didn't take any pictures of...  Trevan said that was his favorite part, even though they didn't play that much because we took a break to cut cake and such and they never went back to it.  But, I got the idea from HERE.

What I really wanted to do was fill a box with golden chocolate eggs for the favor, but it's not Easter time, so those were not available.  I bought gold spray paint and was going to spray the eggs, and then decided to just find the yellow ones in our Easter stash instead.  I was running out of time, people!  Then the eggs were too small to fit the candy Trevan had picked out to put in the eggs...  So, I printed up these boxes and added some candy, angry bird gummies, and one "golden" egg. 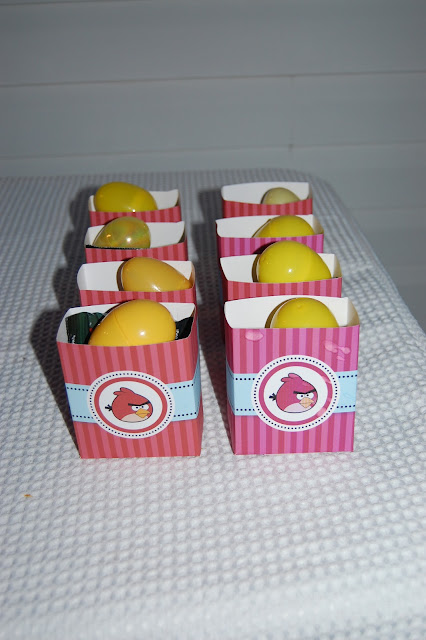 There were plenty of things I wanted to do, but just didn't or couldn't make happen in time.  My stupid colored printer ran out of ink and I couldn't print off the faces for the balloons I had bought, or the faces for the balls that were the "birds" for the box game.  Oh well...
Honestly, kids don't care about all that extra stuff (though Trevan was a little bummed when I told him their wasn't any colored ink in the printer for the faces for the balloons...), or if they do, after the party they forget all about it!
Thank you Pinterest for saving my son's birthday party!  ﻿