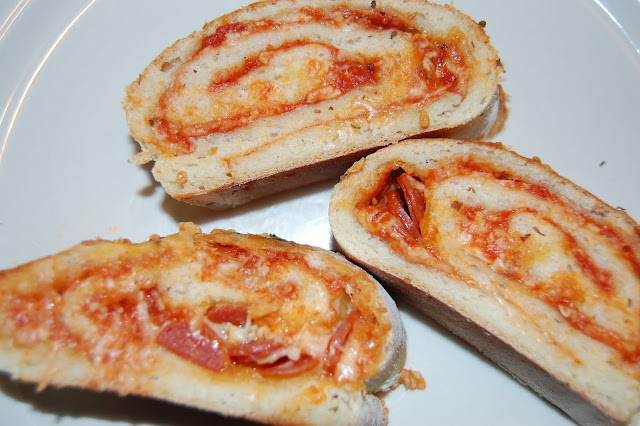 Seriously, you guys this is a great recipe.  I have made this recipe quite a few times, and I have made the dough by itself a few more times than that.  It has turned out every time.  I had a dough recipe that I used to use and like, but I enjoy trying different recipes because you never know what your new favorite will be!

I found this recipe on Pinterest - the dough HERE - and the stromboli HERE.  She totally puts step by step pictures on her recipes, so if you need the step by step, check out her blog.

The only thing I changed with the dough recipe was I reduced it to 1 tsp. of salt.  I thought 2 tsp. was a bit salty, especially after you added cheese and sauce, which both have salt in them.  But, I'm weird because for a while I was trying to keep my sodium intake under 1,000 mg, so ever since then I can really taste salt in food.

1.  In a large mixing bowl, preferably a stand mixer, stir yeast and honey into warm water. Sit for 5 minutes or until bubbles form and mixture starts to foam. This tells you that the yeast is working.

3.  Once that flour is incorporated, start adding flour in bit by bit until you get the pizza dough to the consistency you want: slightly tacky, but when you touch it it doesn’t stick to your hands.

4.  Once you reach this stage, turn the mixer on high to knead for 6 minutes.

5.  Lightly grease the bowl & the dough so it doesn’t dry out, cover with plastic wrap and let it rise until doubled.  Mine took less than an hour to double.

1/2 lb. pizza dough (I used a little more to make it thicker, and then made a little pizza with the leftover dough from the above recipe)
1/2 cup pizza sauce (I used Marzano sauce, quite tasty)
Cheese to your liking
Other toppings to your liking (I like green peppers, onions, mushrooms...) (the picture above was my kids stromboli with just cheese and pepperoni)
1 egg, beaten
dried parsley, parmesan cheese
extra pizza sauce for dipping

3.  Spread pizza dough out on baking sheet to be approximately 10×16. Spread pizza sauce over 2/3′s of the dough lengthwise, leaving a 3×16 rectangle of plain dough along one of the edges.

4.  Top sauce with half the grated cheese, and other toppings. Top with remaining cheese.

5.  Brush the plain strip of dough with the egg. Fold in the sides about an inch.

6.  Roll up like a jelly roll lengthwise starting along the long edge of dough topped with all the fillings and ending with the plain strip of dough on the bottom of the roll.

7. Brush the entire stromboli with egg and sprinkle parsley and parmesan cheese over the top.

8.  Cut diaganol slats in the top of the dough every 1-2 inches.

9.  Bake 15 - 25 minutes or until bubbly and golden. Remove from oven, cool 5 minutes and slice into pieces. Serve with more pizza sauce if desired.