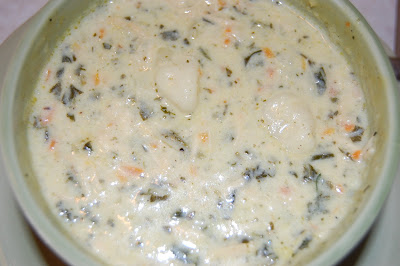 I told you I was in the mood for soup...

I always enjoy the chicken and gnocchi soup from Olive Garden, but it never has enough pieces of gnocchi in it!!  Well, I solved that problem with making my own soup!

This recipe is super yummy, but after having the real soup at Olive Garden, I couldn't taste any thyme, so I'm not going to use that again.  I could taste more nutmeg though...   Also, I used frozen spinach turning my soup the color it did, the real soup has a few pieces of fresh spinach in it.  It looks prettier that way.

I also doubled this recipe, and it filled my large pot.

I made my own gnocchi, but only used a portion of it for this recipe because it made so much.  I will post a recipe next week of what you can do with your leftover gnocchi from this recipe and your leftover kale from the Zuppa Toscana soup!

I found the recipe HERE and followed it pretty much to a tee, except I used frozen spinach, and John dumped my carrots in too early.

And, yes I made my own gnocchi!  You can buy it from the store, but where's the fun in that?

I used this recipe for the Gnocchi

I used this tutorial on how to shape the Gnocchi but I tried to use a bowl instead of the cheese grater he shows, so I did the final part of shaping them like this video.  I'm going to practice saying Gnocchi like the chef in the first video does...

Instructions
1.  Saute the onion, celery, and garlic in the butter and olive oil over medium heat until the onion becomes translucent. A
2.  Add the flour and make a roux. Let the butter and flour mixture cook for about a minute before adding 1 quart of half and half.
3.  Cook gnocchi according to package directions.
4.  Into the roux, add in the carrots and chicken. Once the mixture becomes thick, add the chicken broth. Once the mixture thickens again, add the cooked gnocchi, spinach, and seasoning; simmer until soup is heated through.
5. Enjoy!

*So, I wasn't paying attention to the recipe last time I made this and made it using store bought gnochhi (which I cut in half).  I just threw the gnochhi in the pot without cooking it first.  I added another cup of chicken broth to make up for it, and it turned out yummy.  This makes the soup a little thicker which I like, but if you want it thinner, I'd add a little more milk or cream too.