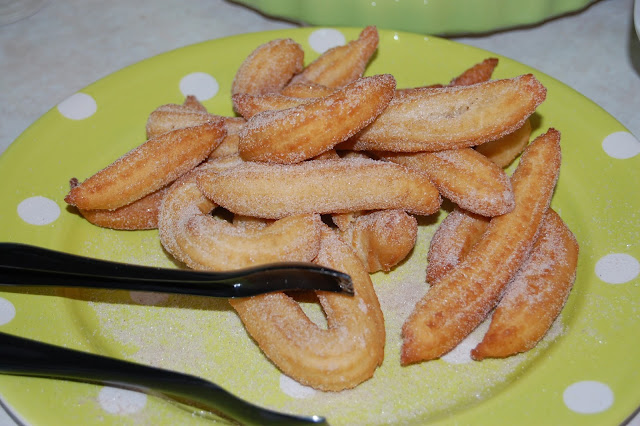 We made churros for our Cinco de Mayo party. However, John was helping me in the kitchen and sometimes when that happens a funny recipe occurs.  So, we used the recipe below, and the batter wasn't thick enough to pipe into the oil, so we added more flour.  On another day, I made this recipe again and it didn't need the added flour, however making the churro a little lighter with an eggy kind of taste.  So, I almost prefer the first way we made them and it was a product of us somehow messing up the recipe I think!  So, I'll probably make them again to see what the third time brings.  Either way, we enjoyed eating them!

2.  In a separate dish mix the 1/4 cup sugar and cinnamon and set aside.

4.  While heating the above, in a separate bowl, mix the eggs and vanilla together.

5.  Remove from the heat and add the flour. Stirring in the flour will take some muscle. Mix it in until well blended.

6.  Add egg mixture to the flour mixture. Stir until well blended and all the egg is completely mixed in.

7.  Fill your decorating tool with the churro recipe dough and attach the largest star tip you have.

8.  Test your oil by placing a small amount of dough in it. The dough should bubble up right away or that means the oil is not hot enough and a soggy churro is on the way.

9.  Once the oil is hot enough, squeeze some dough (with decorator) into the oil about 4 inches long. I used my finger to release the dough from the decorator. Careful not to burn yourself.

10.  You should be able to cook 4 or 5 churros at a time. Cook them about 1 minute and turn them over with a slotted spoon. Cook an additional minute or two. You're looking for that nice golden brown color.

11.  The original recipe says to remove the churros with the slotted spoon and place them on a paper towel-covered plate to absorb excess grease.  Then, while still warm, roll each churro into the dish with the sugar and cinnamon until coated.  (I ended up putting them from the fryer straight to the sugar mixture so they get more of the cinnamon sugar mixture.)