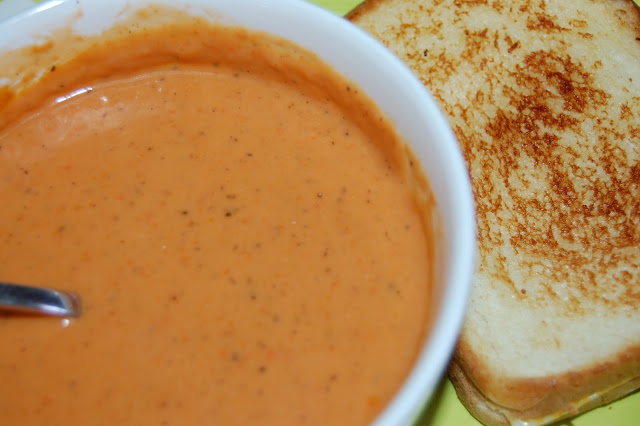 This recipe doesn't look like anything special, but it is delish!!  Even my VERY PICKY eight year old ate it and asked for leftovers every day!  I was amazed!  It is so easy to make as well.  This is one of those soups you would have in a nice bistro.  The flavors are really fabulous!  The only thing I did different was to use an immersion blender at the end because my kids won't eat chunks of tomatoes, and I used some skim milk.

This will definitely be a regular around our house now, and, I've never really been a fan of tomato soup, so that is really saying something!

2. Cover and cook on LOW for 5-7 hours, until flavors are blended and vegetables are soft.

3. About 30 minutes before serving prepare a roux. Melt butter over low heat in a skillet and add flour. Stir constantly with a whisk for 5-7 minutes. Slowly stir in 1 cup hot soup. Add another 3 cups and stir until smooth. Add all back into the slow cooker. Stir and add the Parmesan cheese, warmed half and half, salt and pepper. Add additional basil and oregano if needed (the slow cooker does a number on spices and they get bland over time, so don't be afraid to always season to taste at the end).

4. Cover and cook on LOW for another 30 minutes or so until ready to serve.