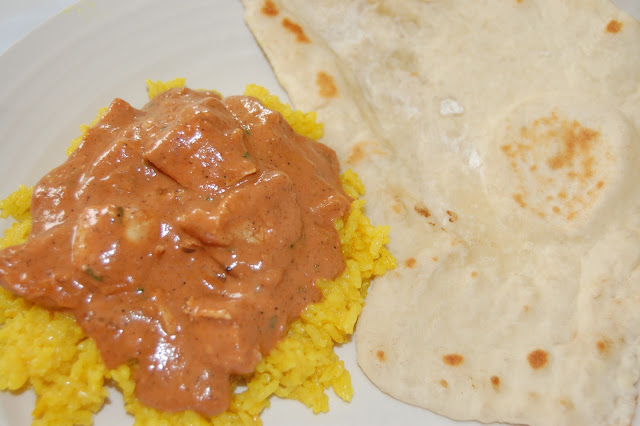 We love Indian food at my house, and this past summer I tried a lot of different recipes. I'll be posting them this week.  Surprisingly, my kids like to eat it too.  Once I was making rice for a recipe, and my oldest came downstairs, smelled it, and said, "Yay! Indian food for dinner!"  He was very disappointed when I told him otherwise!
This recipe was good!  Found it on Pinterest, it's a Pioneer Woman recipe.  Chicken breasts are healthiest but to make it more authentic you would use chicken thighs, etc.
This recipe was a little more involved (took more steps) than a lot of Indian food dishes, and I didn't notice a big difference in the flavor.  I'll post somemore Indian food recipes I've tried...  I also like saffron rice better than this tumeric rice.  Tumeric just has a funny/bitter kind of aftertaste, but still good!
I also tried this HOMEMADE NAAN RECIPE and it was great!!!  After experimenting with different recipes, this is the best one I've found so far.  The trick is having a hot pan!
Chicken Tikka Masala Recipe
Recipe from HERE﻿

Start by seasoning the chicken breasts with some kosher salt. Next sprinkle them on both sides with some coriander and cumin. Then coat the chicken breasts completely with the plain yogurt. Set the chicken on a metal cooling rack over a foil-lined baking sheet and place it about 10-12 inches below a broiler for 5-7 minutes per side. Watch carefully so as not to totally char the chicken. It should have slightly blackened edges. Remove from oven.

Next dice one large onion. In a large skillet melt 2 tablespoons butter over medium-high heat. Toss in the onions and sauté until they are slightly browned. As the onions cook, mince your garlic. Next, cut off the outer skin and grate a 1 by 2 inch chunk of fresh ginger. Add the garlic and ginger to the onions. Also throw in about 1 tablespoon of salt.

Next you are going to add about 3 tablespoons Garam Masala spice. And if you like it hot, this is also when you will add your hot chili peppers. Serranos work well. Now you are going to add your can of diced tomatoes. Continue cooking and stirring, scraping the bottom of the pan to deglaze it. Add about 1 tablespoon sugar. Let this mixture simmer on medium for about 5 minutes.

After the Tikka Masala sauce has had a chance to simmer for a little bit, add in the 1 ½ cups of heavy cream. Now, chop up your chicken breasts into chunks and stir them into the Tikka Masala sauce. A handful of chopped fresh cilantro is a nice addition if you like cilantro. You can also throw some frozen peas into the cooked rice, give them a stir, and allow the heat of the rice to cook the peas. It tastes great and gives another nice dash of color. Serve the rice with the Chicken Tikka Masala over top.