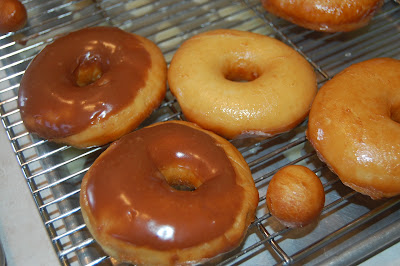 Oh boy, I never should have made this recipe... my family is now addicted!  When they were all gone, my kids asked if I would make some more.  I said I would in about a year....

This is a great recipe!  We were all impressed!  I think they really do taste like Krispy Kreme Doughnuts!

I read the reviews for the recipe I ended up using (from HERE), and a common review was to use less vanilla in the glaze, so that was the only change I made to the original recipe, I include the amount I use in the recipe below.  Well, I also changed the kind of chocolate chips.  I think the glazes really do taste like Krispy Kreme's.

The only thing is, I haven't cooked using shortening in at least six years, maybe more...  so, I wasn't excited about that.  I may try using butter next time, but shortening does usually make things a little lighter and fluffier...  So, we'll see...

****UPDATE****  So... I made these again using butter and it made a completely different doughnut!  I was so disappointed.  So, stick with the shortening.  Also, for the glaze - Krispy Kreme's glaze is really thin - for the glaze recipe below add one tablespoon of the water at a time until you get it pretty thin.  I think this last time I made it, it was too thick.  I also used Grape seed Oil this last time to fry them in, and I think that seemed to change the taste?  So, next time I make them I will use the canola oil again. 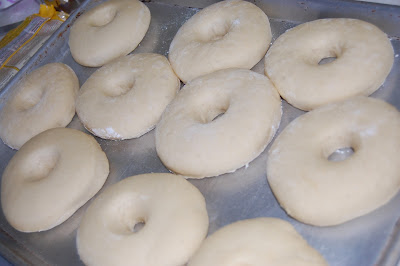 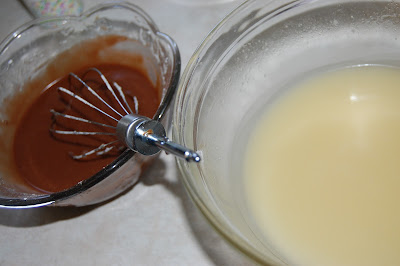 Melt butter and chocolate in microwave. Remove.Stir in powdered sugar and vanilla until smooth.
Stir in water 1 tablespoon at a time, until desired consistency. 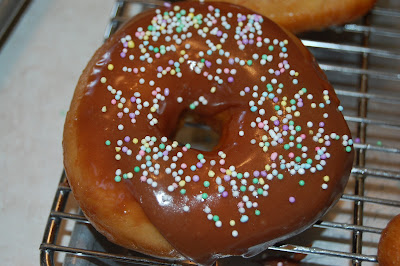