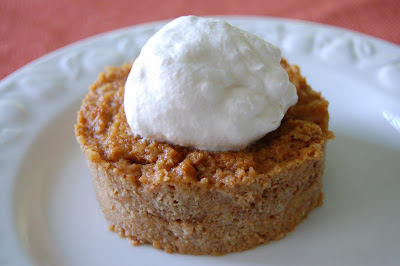 I remember watching my mom make bread pudding more than once, and I don't remember her measuring her bread. The first time I made this pumpkin bread pudding recipe, she tried to add other bread, besides the french bread that I had purchased. She didn't think I had enough bread it it. My poor mother. I gave her such a hard time about substituting and experimenting, and now I totally do it. She'd be proud. Or she could be saying, 'I told you so..." (though she was never really and 'I told you so' kind of person...)
I recently made bread pudding using all the old packages of wheat bread that were in my refrigerator. I'm not sure why I had so many packages almost empty in there, and was a little leery about using only wheat bread... but it turned out great! Really, it was quite a healthy dish, because I only buy the double fiber, high in protein, low in sugar wheat bread. So, a dish of this stuff was very filling! But, also very tasty! So I felt little guilt while eating this for breakfast. (and still lost weight the week I made and ate it...)
This is also a great dessert to bake in ramekins. (You do know of my love for things served in ramekins, right?) I did bake mine in a square pan though, and just cut out circle servings.
So, you can totally make your bread puddings healthier by not only using wheat bread, but by cutting back on the cream, and using half and half and regular milk. Mine still tasted wonderful!
A "healthier," festive treat!