I wanted to make a special Valentine's Dinner for John and I. 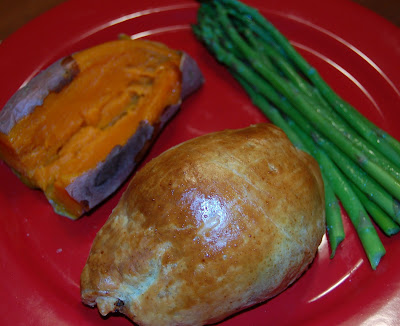 I had tried Beef Wellington at a wedding about three years ago and have wanted to try and make it ever since. I finally did yesterday. I researched a lot of recipes, chose one, printed it up, and forgot to buy some of the ingredients. Some of the recipes seemed to be very heavily seasoned with thyme, and I like thyme, but didn't want just a thyme seasoning. So, this recipe ended up being my very own creation.
HOLLY'S BEEF WELLINGTON RECIPE:
2 lbs of filet mignon (okay, this is pretty pricey, so I only bought one pound of this (2 filets) and one pound of top sirlion filet (3 filets), which didn't turn out as tender, but still good, and cheaper!)
Olive Oil
Salt
Pepper
Dijon mustard (I forgot to add this, but had seen it in one of the recieps, and had really wanted to try it. I think it would have tasted good...)
1 Box of Puff Pastry (thawed to room temp.)
1 egg
Rosemary or Thyme sprigs for garnishing (I didn't have, but would have looked great on top of the finished pastry)
Most recipes say to tie meat into a circle shape, I didn't care about that, so I didn't do it. Drizzle with olive oil, and season with salt and pepper. Pour a little olive oil in the bottom of a pan and heat over medium heat. Sear filets, about three minutes on all sides. Remove from heat, and lightly smear with dijon mustard (I forgot to do), let it cool slightly, and then cover with plastic wrap and set in fridge. (I read that this is to prevent over cooking during the baking process)
Mushroom Filling Recipe (Called a Duxelles, but I don't use words I'm not sure how to pronounce.):
1 lb. of white mushrooms
2 green onions (most recipes called for shallots, but I forgot to buy some...)
1/2 tsp. dried thyme (you could use fresh, also forgot to buy...)
1 tsp. dried rosemary leaves (I was going to use fresh, and when I went to get some from my herbs outside, it didn't look very good...)
4 cloves of garlic
Peel mushrooms (don't wash, just peel outside layer off), and then put above ingredients in a food processor and pulse until finely shopped. Add 1 T. butter, and 1 T. olive oil in skillet, and saute mushroom mixture for 6-8 minutes over medium heat until most of the liquid has evaporated. Sprinkle with salt and pepper. Set aside.
In a small bowl, whisk one egg, to make an egg wash. Roll out puff pastry on lightly floured surface. Cut desired size to wrap beef in. Spread a portion of the mushroom filling onto the pastry, and top with beef. Wrap up the beef, sealing edges with egg wash, and brushing the top of the pastry with egg wash.
Bake at 425 degrees for about 40 minutes until pastry is golden brown and beef registers 125 degrees on an instant read thermometer. (I know filet mignon is supposed to be served very rare, but I don't do pink, so my meat was cooked a little longer. I actually overcooked the sirlion a little to most people's standards, but not mine.) Next time, I'm going to try and make these as appetizers. 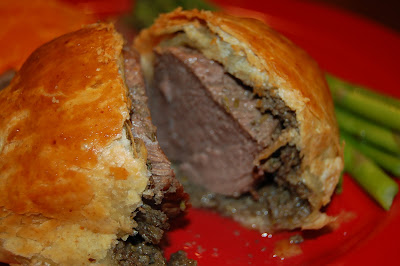 John's favorite dessert is chocolate molten lava cake. I have, and have made a ton of those recipes, but decided I would try a new one for our Valentine's dinner. Turns out it that this is my favorite molten lava cake recipe I have tried yet (and I've made a lot). It is Paula Deen's recipe, and you can find it HERE. (MY TIP: When the timer went off, my hands were full, so I just turned off the oven and left the cakes in there, and by the time I went to take them out they had burned on the edges. So, when these are done, take them out of the oven!! I also didn't add the orange flavoring that the recipe called for.) DELISH! 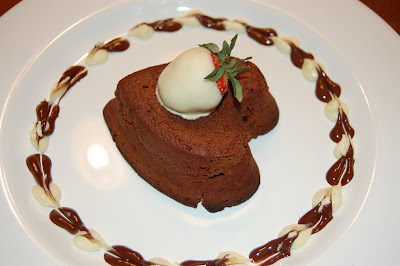 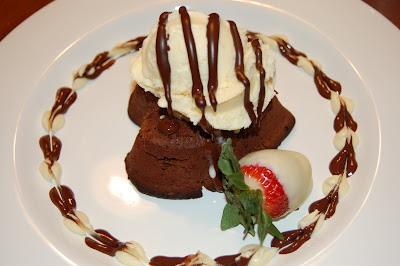