I had a pork tenderloin I needed to use, and decided to make up my own recipe for a stuffed pork loin. I had a few setbacks - the tenderloin was cut in half already when I opened the package causing me not to have as thick of pork to work with, I didn't feel like finding my kitchen string (it's such a multi-purpose item that it could be anywhere in my house or work room...) so my pork didn't stay rolled very well, and I didn't have an orange to use for the sauce and chutneys like I wanted to (so I subbed with canned mandarin oranges, which was fine, though not as strong a flavor, but still fine). 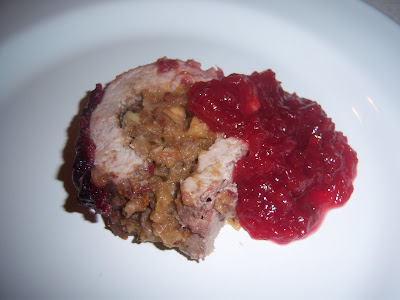 I made a sausage, cran-apple stuffing to stuff the pork with and cooked it covered in cranberry sauce, and made a cran-apple chutney to serve it with.
You can make your own with your own choice of seasonings, stuffing, or sauce.
STEP ONE: Butterfly your pork loin, beat it with your meat tenderizer, and season it to your liking. I ran out of time to be too creative and just used salt and pepper.
STEP TWO: Make a stuffing. I was going to make my own from scratch, but knew I wouldn't have time, so I used the pork stuffing mix. You could just stop there, but I wanted to add some spice to it, so I added; a cooked apple, minced onions, garlic, cooked sweet Italian sausage, and about one fourth of my homemade cranberry sauce (you could use canned, I just like to add other flavors to mine).
STEP THREE: Spread stuffing on pork, roll up pork, tie it with string, cover it with your remaining cranberry sauce. You could use any sauce, or even a jar of preserves (apricot), or even apple cider (I've done apple butter). Bake @350 for 45 - 60 minutes depending on the size of the pork and how thick or thin you made it.
STEP FOUR: Make a sauce to serve with it, or you could do the same sauce you bake the pork in. I just made a different sauce because I wanted to experiment a little.
STEP FIVE: Enjoy!
It's so fun to create your own recipes. You start with the basics and add in new flavors you like!