I just decided that I'm making these again today! Delish! 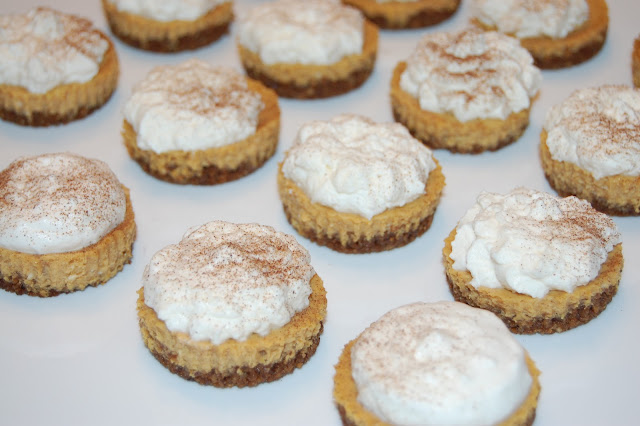 These were yummy and simple to make!!!  No tricky cheesecake business here, and letting it cool in the oven, etc.  If you make your own cheesecake you know what I'm talking about.

I didn't have a mini cheesecake pan like the person who originally posted this recipe, so I used my cupcake pan.  I had wanted to do my mini muffin pan, but I didn't have any liners for it (I had Christmas ones, and I wasn't going to take those to a Halloween party...), so I had to use the big muffin pan.

It worked great - the cupcake liners basically peel off on their own.  I just had to shorten cook time.

The only change I will make to this recipe next time is to leave out the pecans in the crust and sub another graham cracker for them.  I like pecans, but I think this crust would be better with just using the gingersnaps and graham crackers.

** My gingersnaps were really big, and because gingersnaps really vary in size, you'll have to play it by ear how much butter you'll need - I ended up using 2 T of melted butter

2. In the bowl of a food processor, grind all ingredients for crust, except for the melted butter. The mixture should resemble slightly coarse crumbs. Remove mixture and pour melted butter over. Mix until crumbs are wet. Press into the bottom of each hole. Place in oven and bake for 5 minutes. (Just so you know, because the liners aren't full it will seem like they start burning... hence only the 5 minutes...)

3. While crust is baking prepare filling beating together cream cheese, sugar and pumpkin puree until smooth. Add spices, vanilla, heavy cream and egg.  Beat until combined.  (Always beat your cream cheese alone first before adding anything to it to help prevent lumps)

4. Pour filling over each crust, dividing evenly. Place in oven and bake for 10 minutes or until puffed and kind of firm. Remove from oven and cool in pan for 20 minutes before removing cheesecakes (yes your cheesecakes will sink a little, this is normal).

5. Refrigerate for 2 hours before serving.

6. While cheesecakes are cooling, prepare vanilla bean whipped cream by fitting a chilled mixing bowl into your stand mixer. Add heavy cream, sugar and vanilla. Using the whisk attachment beat on high for 2-3 minutes until stiff peaks begin to form. Return to refrigerator until cheesecakes are ready to be served.

7. To assemble, remove cheesecakes from muffin liners.  Then, using a mesh sieve, lightly dust cheesecakes with pumpkin pie spice before or after topping with a swirl of whipped cream.

****  I think the original serving size is for 12.  But, I wanted to make it stretch farter, and I made 18.  (That is what these pictures show)  I have made it again and doubled the recipe so the cupcakes were fuller (18).  You could really make 24 and be fine with the doubled recipe too.