I've decided this week is going to be breakfast week.  With school starting back up again, it's fun to have new breakfast recipes to feed to your kids, right??  ﻿ 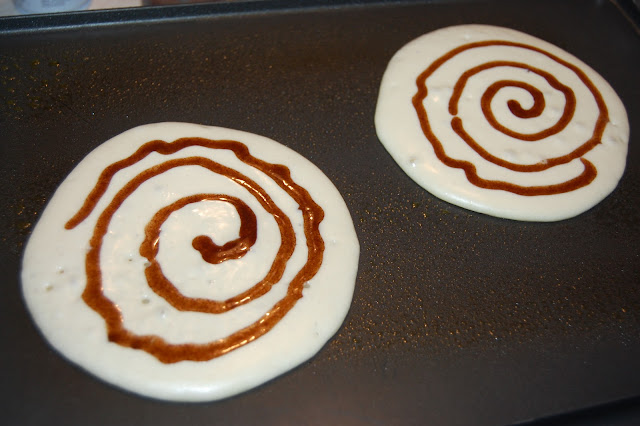 I found THIS RECIPE on Pinterest and it was a winner.  She has very detailed pictures and tips if you want to check out her site, but I'm way too lazy to do all that.  :)  The only thing is I just had one extra guest, and this recipe definitely doesn't make enough, so I ended up tripling it.  So, if you are feeding a crowd, double or triple the recipe below. These are super yummy!!!

1.  Prepare the cinnamon filling: In a medium bowl, stir together the butter, brown sugar and cinnamon. Scoop the filling into a quart-sized heavy zip baggie and set it aside.  I used a funnel and poured the mixture into a plastic squirt bottle.

2.  Prepare the glaze: In a small pan, heat the butter over low heat until melted. Turn off the heat and whisk in the cream cheese until it is almost smooth. Sift the powdered sugar into the pan, stir and add in vanilla extract. Set the pan aside while you make the pancakes.

3.  Prepare the pancake batter: In a medium bowl, whisk together the flour, baking powder and salt. Whisk in the milk, egg and oil, just until the batter is moistened.

4.  Cook the pancakes: Heat a large, nonstick skillet over medium-heat and spray with nonstick spray. (I use my griddle)  Add desired amount of batter to the pan to make the size of pancakes you want to make.  Spread the batter into a circle (to desired size).

Snip the corner of your baggie of cinnamon filling and squeeze the filling into the open corner. (Make sure you mix your cinnamon mixture before squeezing it onto the pancake. When your pancake begins to form bubbles, add the filling. Starting at the center of the pancake, squeeze the filling on top of the pancake batter in a swirl (just as you see in a regular cinnamon roll). Cook the pancake 2 to 3 minutes, or until the bubbles begin popping on top of the pancake and it's golden brown on the bottom. Slide a thin, wide metal spatula underneath the pancake and gently but quickly flip it over. Cook an additional 2 to 3 minutes, until the other side is golden as well. When you flip the pancake onto a plate, you will see that the cinnamon filling has created a crater-swirl of cinnamon.

Wipe out the pan with a paper towel, and repeat with the remaining pancake batter and cinnamon filling.

Re-warm the glaze briefly, if needed. Serve pancakes topped with a drizzle of glaze.  No syrup needed!  :) 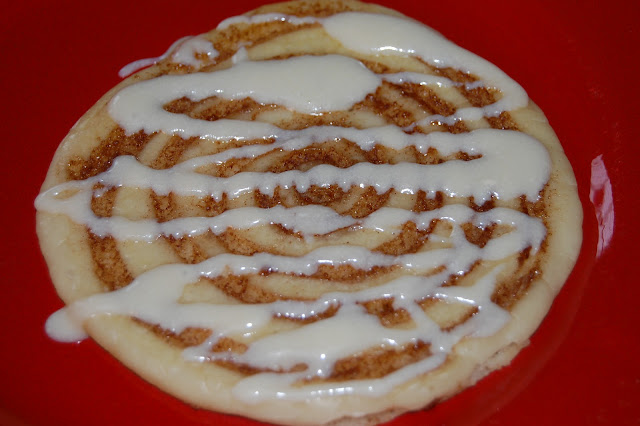