I was talking to a friend who found out she was expecting (but not expecting to be expecting due to the fact they decided they were done having children - her youngest being 6) and I had the idea to throw her an, "Oops, I did it again!" baby shower.

I like themes for showers; I think it makes them easier, and more fun to plan - but I couldn't come up with any ideas of what to do with that theme. When I throw showers I like to do something different. If I've seen something done at a shower more than twice, you can pretty much guarantee it won't be at a shower that I throw. I want each party/shower to be original and different.
Well, my friend isn't finding out what she is having, and she was talking about how she would appreciate just getting diapers and wipes for her shower, and then I got the idea -
"pOOPS! She did it again!"

Poop! Of course!
I imagined serving all the food in diapers, then ruled that out, and thought of using newborn diapers as the place cards to put what the foods were, and ruled that out. I even thought about doing the baby food or melted candy bars in the diaper thing, but it's overdone, and I ruled that out too (all part of the brainstorming process).
This is what I came up with: 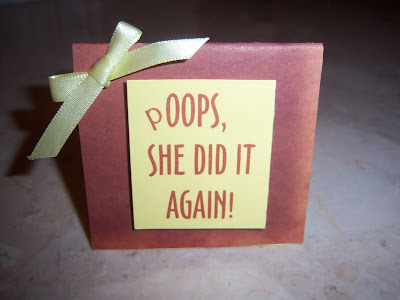 The Invite. I went with a brown and yellow color scheme (imagine that? poop and pee, what else) On the inside it said, "Don't be a party pooper, join us for some fun!" 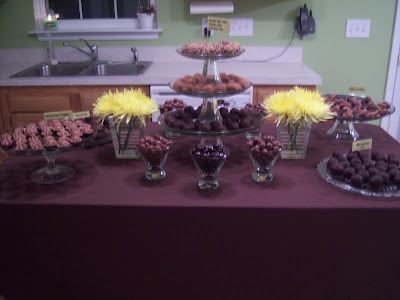 The food. All chocolate. I did break (and always do) the cardinal rule of entertaining: Never serve a recipe you haven't made before. I hadn't made any of these recipes before, even the sparkling lemonade. I think they turned out all right, but you never know what other people really think. 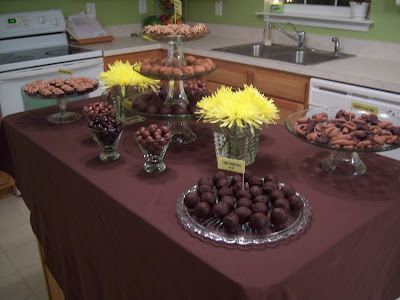 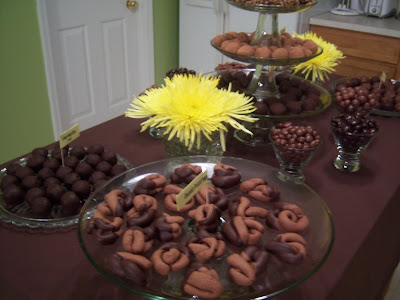 I made cookie dough bites (in the left hand corner) 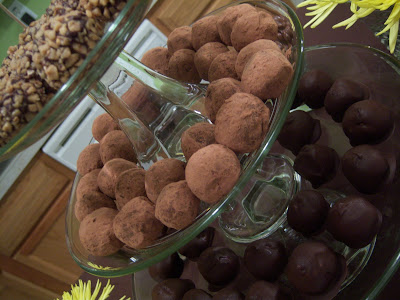 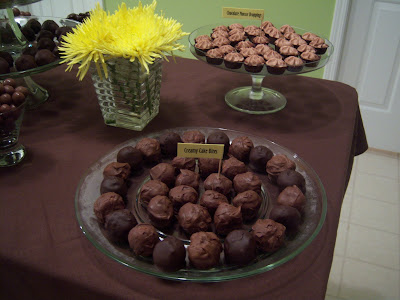 I made creamy cake bites. I thought about making them into cake pops and then I could call them "poo on a stick." I decided against it. 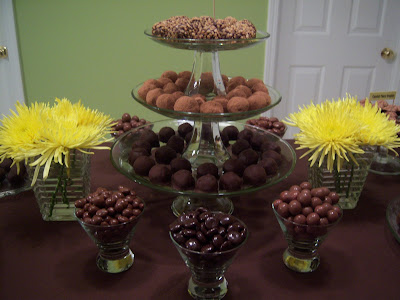 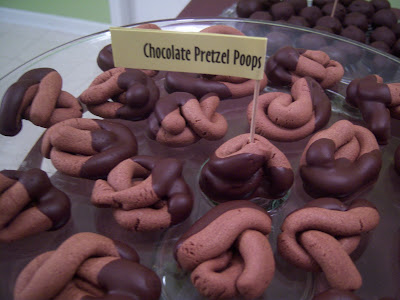 I made chocolate pretzels, and these pretzels are why I collect cookbooks. Browsing for recipes online is great, but sometimes you don't know exactly what you're looking for until you see it. When I saw this recipe for chocolate pretzels, I knew I had to add them to my menu for the shower - with one slight change of course - shaping them to look like poo, instead of pretzels. They turned out great! Gross looking, but great! 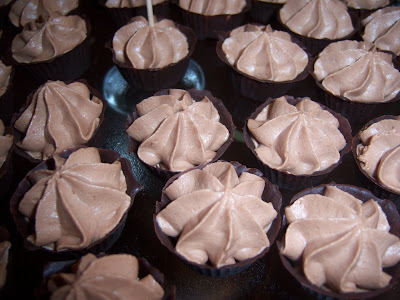 I made "Chocolate Mousse Droppings," (that's what I put on the place card). A couple of years ago I made mousse for the first time, and I have become a mousse-a-holic. Home made of course. This was the first time I had made milk chocolate mousse though. I even made the little chocolate cups to hold the mousse. Those are a little time consuming, but I love the idea. You can buy little chocolate cups, but they are expensive. 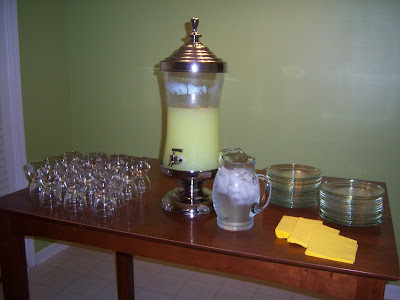 I served sparkling lemonade to drink. I wasn't quite sure what to go with for the refreshment because I was serving all sweet food, so I made sparkling lemonade because it is a little less sweeter than regular lemonade. And, of course it goes with the color scheme.

I think games/activities are tough; because depending on the crowd one game could be a lot of fun, and with a different crowd the same game could be a bust. For the game that night, I had guests write down whatever came to their minds regarding changing diapers on a piece of paper, and we put that in a bowl for people to pull at random, and then did a form of Pictionary/Win, Lose or Draw with the words. I should have taken pictures. Let's just say there were a lot of bums drawn that night.

For my gift, I stuck with the theme and gave this cute book: 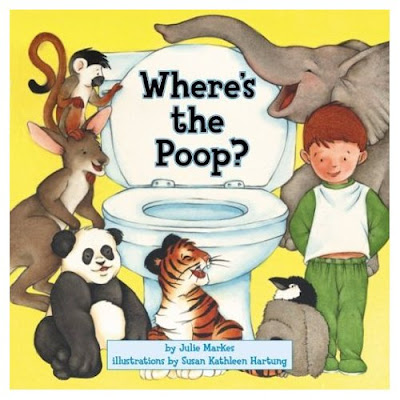 I was also going to put together clear favor bags filled with poo looking candy tied with a yellow ribbon, but I ran out of time, energy, and money.
So, that's my little poopy baby shower.